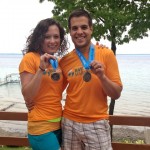 I joined the marathon staff in 2005 and served as the Charity Coordinator through 2011. Now I’m helping to coordinate the post-race food area where our goal is to make sure that no runner goes home hungry after the race.

Since joining the committee I have completed two marathons, four half marathons, two 25k’s, and one triathlon. I was never a runner before joining this group but can honestly say being part of the Grand Rapids Marathon staff has changed my life. After being one of the only people on staff that had NOT done a marathon, I decided that needed to change. Around 2009 or 2010 I told Don I would run a marathon once I lost some weight. I started eating right and training more and lost nearly 50 pounds. On April 23, 2011 I married my wife Erika, also on staff, and a month later we both completed our first marathon and vowed to never do it again. We completed our second marathon exactly one year later!

Along with working for the marathon I am a member of the National Ski Patrol and enjoy any activity or hobby that keeps me active and outside. I’m proud to say I am a small part of one of the best marathons around I have have enjoyed watching this event grow and change over the years.