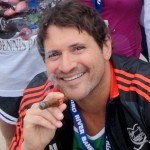 Dr. Rick ran his first marathon in 1994 and made many of the normal rookie mistakes. He went out too fast, didn’t eat or drink enough, and struggled his way through the final eight miles. He has now run 108 marathons – including the last 14 Boston Marathons! Over the years he has figured out that with proper training, pacing, and smart race day decisions, Mile 26 can actually be a very pleasant experience.

Dr. Rick has had a lot of fun over the years encouraging family and friends to attempt a marathon, and then running it with them. He is a running chameleon of sorts, because he is happy running at almost any pace. He has successfully led the 3:10 pace team at Rock & Roll Arizona, and he ran with his niece on her 5:11 marathon debut in New York City. He says both were incredible experiences. He has paced lots of runners over the years at a wide range of different paces, and he loves doing it.

So when we started the Grand Rapids Marathon in 2004, he immediately volunteered to be the pace team director, and he’s been organizing our pace teams ever since. He came up with the idea of using celebrity finish times for the pace team target times. He says, “People would always ask if they beat Oprah, so we decided to just make that the pace. I think we are the only marathon in the world with celebrity pace teams!” In addition to directing the pace teams at Grand Rapids, Dr. Rick is responsible for the pickle juice you will find along the marathon course. He began drinking the salty brine many years ago to ward off muscle cramps, and he arranged for Heinz to become our official pickle juice provider. Grand Rapids is the only marathon we’re aware of serving pickle juice to its runners – another first!

Dr. Rick graduated from the University of Michigan Medical School and completed a four year residency in the Department of Anesthesiology and Critical Care Medicine at the University of Pittsburgh Medical Center. He is currently President of Macatawa Anesthesia in Holland, Michigan. His marathon PR is 2:50:44, and he has broken three hours in the marathon nine times, most recently with a 2:57:11 at the 2015 Bayshore Marathon! He was the master’s winner at the 2006 Bayshore Marathon and the 2008 Fallsburg Marathon, and he was the first American finisher at the 56-mile 2009 Comrades Marathon in South Africa and the second American finisher (out of 216 Americans!) at the 2013 Comrades.